Country Harvest burger named one of best in UK

A SPICY burger created by our butcher Kabel Taylor has been named one of Britain’s best – beating rivals from some of the country’s top retailers.

The Cajun chicken burger was made by Kabel specifically for the prestigious Meat Management Industry Awards 2016. The mix of chicken, onion, delicate spicing and crispy covering of Cajun schnitzel breadcrumbs captured the judges’ attention and they awarded the burger a Highly Commended accolade in Britain’s Best Burger category.

It’s not the first award for the Taylor brothers. Younger brother George, who runs the butchery department here at Country Harvest, is a former Young Butcher of the Year and has won national awards for his pork sausages; his lamb and mint burger was also highly commended at the Meat Management awards last year.

“Kabel and I work really well together and it’s great for him to win the award this year! We made some turkey burgers after Christmas and they went down really well, particularly when people were thinking about health and perhaps losing a bit of weight. So when we decided to enter these awards Kabel came up with the idea of a lightly spiced chicken burger. We tried them out on our customers and we’re over the moon that the judges liked them as much as our customers did,” said George.

The brothers make up to 10 different flavours of burgers and sausages a week. “We are always getting our customers to try out the new flavours, often people need to taste before they buy. We put out pork, ginger and spring onion sausages for a tasting and they started selling really well – before that nobody bought them! But our best seller by far is our pork sausage which won Reserve Champion at an awards in November and since then sales have gone up massively,” said George.

“I really enjoy working in the backroom, creating new recipes and preparing all the meat products for the customers. I leave George to be the frontman and it’s great that he’s so pleased my burger has won this award – we really complement each other,” said Kabel. 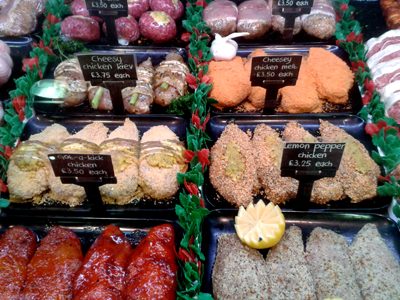